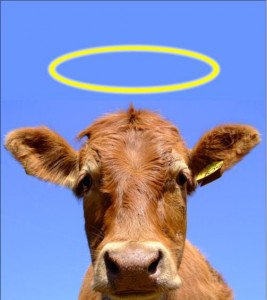 An intense debate is brewing across the nonprofit sector right now.  Chances are you’ve probably been party to this debate, whether on the pro or con side of the discussion.

At the heart of this debate lies question, what is the appropriate role of social media for nonprofits?  Is it an effective fundraising tool, or an expensive distraction?

I think the answer is somewhere in the middle.  It is clear to me that there are a lot of snake oil salesmen trying to cash in on this new shiny object that has captured the focus of many nonprofit executives.

Social media is an important part of any nonprofit’s marketing mix.  But that’s just it – it is one component.  If you look at social media as a replacement for more expensive traditional media vehicles like direct mail, television and radio, you’re doomed to fail.

Likewise, if you completely cast social media aside as a fleeting fad, you risk alienating donors and advocates who want to engage with you in this more intimate way.

As we’re having this very discussion at my office right now, I wanted to see what other practitioners are saying about social media right now.  And I was surprised by a lot of what I found.

For example, care2, a fairly progressive online fundraising company just published Social Media Reality Check which discusses the relative audience sizes of each of the major social media platforms.  If nothing else, this should be a sobering wake up call to those who preach that social media should replace traditional media vehicles.  The bottom line is that social media just doesn’t have the audience volume necessary to be that replacement yet.

In fact, as we talk about social media reality checks, they hit the issue head-on with Myths of Social Media Fundraising over at the blog through nonprofit eyes.  This is dated material (from January, 2011), but I can’t tell you how frequently I hear each of these assertions from so-called experts and nonprofit executives (trust me, it’s a lot!).

Additionally, several months ago Network for Good published a study on online giving behavior.  There is some great data in this study, including one particularly interesting assessment of charitable giving through social media.  Network for Good’s study analyzed giving patterns across 3.6 million transactions and over $300 million in gifts.  Interestingly, they found that those who gave via social media gave the least initially, and had the lowest subsequent giving of all groups analyzed.  As you prioritize how you’re investing your marketing and fundraising dollars, this is the kind of information I hope will help inform your decisions.

Though dated, another interesting study on this topic comes from Cone, the agency that specializes in cause related marketing.  They studied social media’s impact on building awareness and support for causes.  And sure enough, they found that social media can positively impact awareness of a given cause.

However, I think more interestingly, their research also found that the awareness bump, if you will, did not readily translate into action in support of the cause.

We’ve even studied this issue at my company, Russ Reid.  As part of a broader study on donor behavior, we looked at they way in which donors give online.  As you can see from the charts below, our study tends to support the claims made by these other organizations.  Social media, while interesting and moderately useful for nonprofits, still delivers relatively little in the way of fundraising value for nonprofits (only 6% of all donors give via social media). 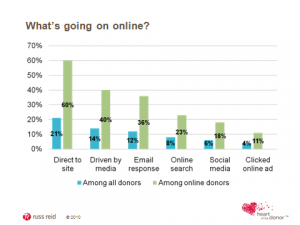 I’d be interested to hear what you think on this topic!

This site uses Akismet to reduce spam. Learn how your comment data is processed.